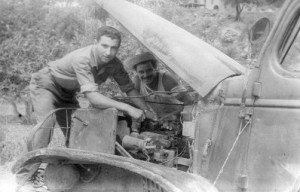 Mike, Sr working on a truck in Italy

Mike grew up in a small town in the mountains of southern Italy, Bisaccia, in the state of Compagnia. At the time, the Italian education system went until the American equivalent of 8th grade. After completing his education, the 12 year old Mike had the choice to either pursue college or learn a trade. He decided to go into the trade of carpentry like his father, Salvatore Caradonna. However after a couple months he became uninterested in carpentry so his mother, Maria Caradonna, suggested he become a tailor and sew suits.

Once again, Mike realized that tailoring was not a job he wanted. He couldn’t sit still long enough to sew and it wasn’t a challenging profession for him. Every day on the way to school, Mike used to walk by an old garage that maintained and repaired road construction vehicles and equipment. Still in search of a job, he was hired as an apprentice. At first he just swept floors and washed windows, but he slowly learned how to be a mechanic and eventually became a lead worker for the company. All of this changed in 1958 when Mike and his family left Bisaccia and immigrated to America. 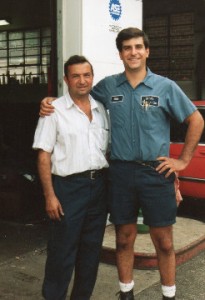 Mike was 26 years old at the time and worked as a mechanic for two years in New York City. In 1960 he moved to Columbus and began working at The Country Fair, a NASH Rambler dealership on West Broad Street. He spoke very little English, but was an admired mechanic because he was an especially productive worker. After three years, he switched to the Dick Clifton Dealership near the corner of West Broad and Central Ave. This dealership sold Ramblers, as well as Fiats, and because Mike is Italian, he worked mainly on the Fiats. Four years later, in 1967, he opened a dealership with two other partners called European Sports Cars. Located on North High Street, Mike and his partners sold Fiats and MG’s.

Ultimately the partnership dissolved six years later, so Mike moved to the Citco Gas station at 1325 W. broad street, the old location of Mike’s Foreign Car Service. He began his business with only $200. He fixed cars and pumped gas when he had to, maintaining his only goal of being able to provide for his family. Little did he know that his business would quickly grow. This is because all of his previous customers from the dealerships followed him to his current job, because they liked how he fixed their cars.

Mike shifted his business by focusing only on cars; he got rid of the gas pumps and built an addition onto the back of the main building. Thus, on July 3rd 1973, Mike’s Foreign Car Service was born.

In 1980, Mike Jr., then a sophomore in high school, started working part time at the shop. He would often work during the summer and sometimes worked after school to help Mike Sr. After Mike Jr. graduated high school in 1982, he worked as a full time mechanic and gradually started taking on more responsibility in the business. Eventually in 1996, Mike Sr. retired and Mike Jr. took over the company and became the owner of Mike’s Foreign Car Service. Mike Jr. now serves some of the grandchildren of the original customers of Mike Sr. and also works on some of the same cars!

And now you know…the rest of the story!

Click on the images below to read full article! 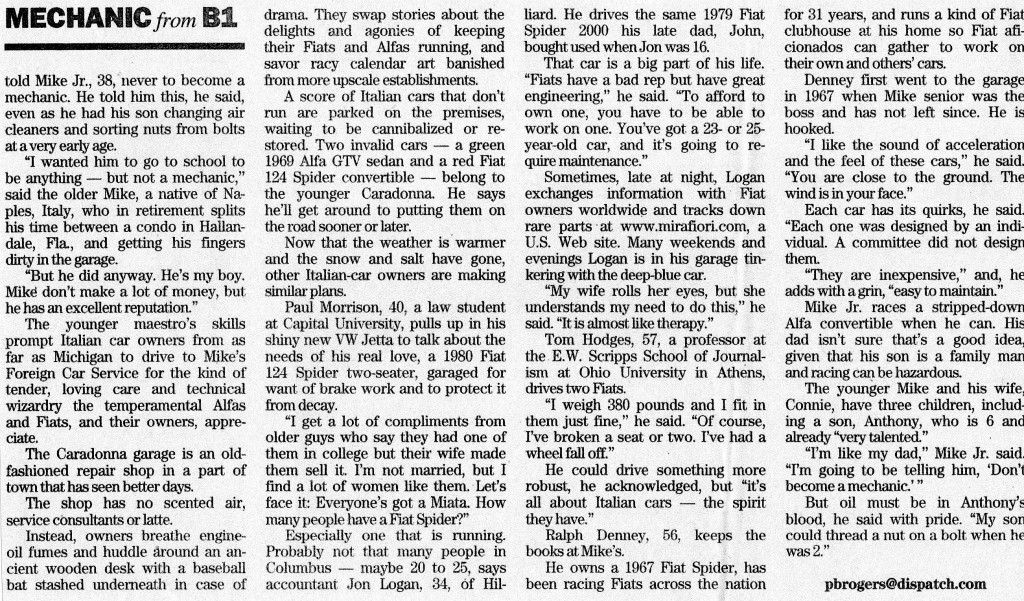